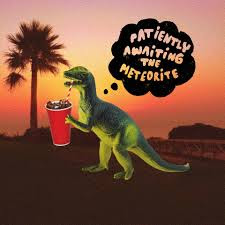 Some releases you know are going to hit based on their opening single and Patiently Awaiting the Meteorite is one of them. Their first single “Electrified” is a full on minor pop masterpiece with solid musical fundamentals and retro touches peppering the arrangement and comes complete with an accompanying music video that’s striking along with a vocal performance from the Grand Brothers’ collaborator Dee that’s worth the price of purchase alone. The single comes from the project’s first full length album release, soon to drop, Canyon Diablo and this single alone makes it abundantly clear the threesome are intent on carrying off something completely different with the modern pop song and its possibilities. It’s nothing less than a rush to hear such talented performers clearly capable of doing more with a song than merely hitting its marks and giving audiences exactly what they expect and nothing more.

There’s a real powerful and stomping quality to the song from the outset, but it’s never mindlessly bashing away. The Grand Brothers employ a production style that gives “Electrified” a nearly cinematic flair without ever overemphasizing the qualities intended to draw listeners into its web. “Electrified” has a steady pace and never rushes itself, but it keeps pressure on the listener for much of the tune and refuses to let go of your attention once it seizes it early on. The synthesizers, keyboards, and other instruments work rather well together and the vocals are incorporated into the arrangement in such a way that they seem part of the song rather than superimposed over the backing track. It’s impressive how such technologically current music can, nonetheless, create such a live feeling for listeners, wholly organic, and radiating warmth in every area. Patiently Awaiting the Meteorite never sounds like a plotted out, meticulously structured endeavor. Instead, the project sounds like a natural fit for all of those involved and natural throughout.

Dee’s vocal performance won’t strike anyone as being the typical singing performance some might prefer, but the unusual qualities of his voice are tempered by a touch of effects applied in post production and there’s just enough backing vocals from a sweeter, more traditional female voice that balances out nicely against his own tone. He handles the lyrics quite nicely – there’s a lot of confidence coming through and, despite his relatively untraditional voice, Dee brings ample musicality to what he does. The lyrics tell listeners, essentially, to push onward with life and never let go of your moment – it’s a positive message that gets through without any sentimentality or extra glossiness. Instead, “Electrified” is a winning tune for both young and old, hardcore and casual music fan alike – Patiently Awaiting the Meteorite have really hit upon a winning formula with this song that they are certain to be duplicating many times over on the project’s debut Canyon Diablo. Hopefully it’s the start of something long term for this collaboration because they bring the goods like few other pop projects today.

Posted by Joshua Beach at 8:36 PM No comments:

Jiggley Jones - Not Your Typical Day Out 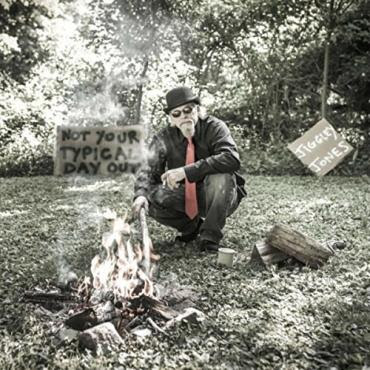 Although his name might give you the idea that he is a flimsy character, don’t let Jiggley Jones’ handle mislead you. JJ is in fact a rock solid singer/songwriter, and his new record Not Your Typical Day Out is likely the preeminent anti-typical folk album of the latter 2010s. After 11 years of cautious creative development, Jones unleashes all he’s got on Day Out, and it really is quite the ten song collection to behold. If you’re looking for your standard pop/rock record, this is definitely not what you’re looking for.

Opening with a quaint set of strings and softly interwoven lyrics, “Danger Island,” the first song on the record, invites us inside the isolated solitude of the band. Smokey basslines cut through the verses alongside their electric and acoustic guitar brethren. There’s a remarkable flow here, as the next song “Wide Awake” seems to start out of nowhere, with a skipping beat and swirling harmonies that have us surrounded before we know it. Jones serenades us with his aching desires, insisting that the object of his affection doesn’t just make him weak at the knees, she’s downright intoxicating to everyone she meets. “Now my senses are wild and free,” he proclaims, as his love has brought him out of the darkness and into the light. The playful “Vibrant” follows with a melancholic sway before breaking out into a celebratory anthem that captures the beautiful innocence of youth as seen through the eyes of a parent. Anyone who has experienced the gifts that children have to share with the world will find themselves overwhelmed by the magical mood Jones creates in the track. There’s a carefree vibe that joins us throughout the whole of Not Your Typical Day Out, not unlike Tom Petty, but there’s much more restraint and optimism in Jones’ lyrical structures that makes the songs sound less like rock music and more like contemporary folk. The compressed vocals on “Gray” relates a multitude of pain in its cold disconnection, while the countrified “Restless” gazes out over the emptiness with a confidence that is as cathartic as it is bittersweet. The latter song could be the biggest gem on Day Out, mostly because of its perfectly timed placement at track nine on this record, acting as a sort of refreshment after the contemplation of the previous songs. From beginning to end, Jiggley Jones gives us a consistently enjoyable LP that touches on as many themes that an independent pop record can.

Not Your Typical Day Out is unsurprisingly generating a lot of attention on music streaming websites and Americana radio, and having already conquered his cult following’s hearts, Jiggley Jones seems absolutely poised to break into the mainstream with this new record. Willfully different than anything else you’ve heard in this decade, it’s easy to see why Jones won the coveted 2013 International Music and Entertainment Awards’ “Songwriter of the Year” prize, and that a couple of Grammys could easily be in his near future. For more information on Not Your Typical Day Out, give it a stream on Spotify or download it now on iTunes & Napster.

Posted by Joshua Beach at 8:04 PM No comments: