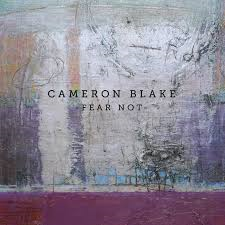 
Residing with his family in the Michigan area, Fear Not represents, in some important respects, a look back on the first quarter of Cameron Blake’s journey through life. Fear is something that he has a close acquaintance with – a near nervous breakdown marked his years in music school and Blake’s willingness to experience life at multiple levels has put him in contact with men and women who experience daily fears about what we normally take for granted. This profound understanding of life and self informs the dozen songs included on his second album Fear Not and there’s an extended array of sounds that goes into making these songs memorable. Cameron Blake might benefit from a music school education, but those academic pursuits never mean his music and lyrical content is staid, studied, and otherwise lifeless. Instead, it helps shape his approach to songs like those found on Fear Not and gives him the grounding to explore large themes like the influence of fear in a near-conceptual fashion. He’s utilized a vast assortment of instruments, as well, for the album and a supporting cast of nearly fifty musicians to help bring this release off.
“Fear Not” stands out for a lot of reasons, but one of the key things distinguishing it for listeners is the vocal melody. Despite his music school training as a violinist, Blake obviously has a keen ear for how to arrange vocals in an interesting way. It helps get a plaintive, yet eloquent, lyric over to any even greater degree and the strings bring another colorful layer to the performance. There are a couple of occasions on Fear Not when a pronounced Americana influence comes through and it’s far from hackneyed and the first is “After Sally”. Instead, the same nuance Blake brings to bear on the other styles casts a long shadow here and makes the tracks stand out for their low key artistry. One of the best tracks on the release “The Only Diamond” has a strong musical pedigree backed up with the most dramatic chorus payoff on Fear Not and, certainly, one of its finest story lyrics. There’s some jazz overtones that come through over the course of the album’s track listing but few of them embody them more clearly than the song “Queen Bee”. This song is a little weaker lyrically, but it’s one of the more interesting musical arrangements and gets off to a fine start.
“Tiananmen Square” is a song that should serve as a glaring example of Blake’s range as a songwriter. He has the rare gift for taking such a pivotal historical event, immortalized in the picture of a lone figure facing down a military tank, and making it speak to personal history as well as the global. This song is the most crystallized vision of orchestral styled popular song he offers the audience on Fear Not. The album’s next flirtation with an Americana/alt-country sort of sound comes with the song “Old Red Barn”, but it’s another hybrid in the end when Blake brings unexpected touches like horns into play. “Wailing Wall” foregoes any drumming in favor of a wafting musical accompaniment that some people might not think, initially, is enough to sustain the song, but it does so spectacularly. “Philip Seymour Hoffman” is another wonderful song, coming late on the album, but sparkling with another inventive vocal melody and backing that mix the now familiar style in a different way. He shifts the mood again on the album’s penultimate tune “Sandtown” has its musical dynamics arranged in a fashion we normally associate with rock songs and transitions dramatically from a restrained opening into a maelstrom of sound during the song’s middle and into the second half. It settles once again before concluding. Cameron Blake’s Fear Not is a beautifully rendered musical work with obvious care going into each of its dozen songs. It’s hard to fathom where he might go from here, but rarely has a work seemingly meant so much to its creator – the sincerity is evident in every note. 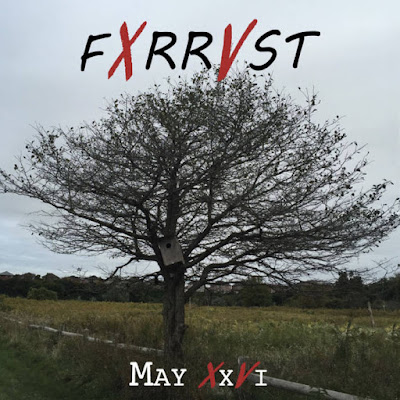 
Nine songs hits just the right note for FXRRVST’s debut studio release – it makes a more substantial statement than an EP could have while still reflecting one of their key strengths for not overstating their talents or aims. Their first album May XXVI is a thoughtful collection of tracks with a couple of critical influences vying for supremacy – Holly Forrest’s influences like Tegan and Sara are placed squarely against the guitar driven pop hooks and alternative rock flourishes that her partner Matthew Fuentes brings into play. Some might think it’s an incongruous match, but each of these songs proves the opposite to a greater or lesser degree. The Toronto duo doesn’t allow their indie status to stand as some sort of obstacle preventing them from presenting a polished, professional product – May XXVI is every bit the sort of high gloss release you’d expect from a major act and the songs are correctly framed by the production rather than botched.
“Road to Nowhere” shows the tandem’s mastery of solid songwriting fundamentals as well as their ability to shake those up a little without sending the song off course. Forrest is a talented singer whose ranges becomes more and more apparent with each new song on May XXVI, but the opener makes the best possible impression thanks to her blend of emotional depth alongside technical excellence along with the superb lyrics that could have, perhaps, risked cliché, but never come close. “Picture Frames”, likewise, holds the potential to lapse into self-indulgence and cliché, but Forrest’s control as a writer prevents this from ever coming to pass. The same control extends to the musical arrangement and, despite a more deliberate tempo than we heard on the first song, his guitar contributions to “Picture Frames” are more dramatic and, ultimately, meaningful. “Drown Me”, however, gives his six string room to fly freer than anywhere else on May XXVI and Fuentes doesn’t disappoint. His lead work near the song’s conclusion is particularly inflamed. The chorus is strong, but Forrest’s paint peeling wail on the payoff line will grab all but the deadest inside. This is a song surging with vitality and life.
“Tidal Wave” is one of the most all-around evocative pieces of writing featured on May XXVI. Fuentes’ guitar work avoids rock posturing here in favor of more melodic and atmospheric embellishments and the solid musical base underpinning everything he does enhances this tune, arguably, more than any other on the album. “Safe House” is one of the album’s shorter numbers and the condensed lyrical qualities of both the music and words alike bring this closer to pure performed poetry than any other song on May XXVI. There’s the same kind of focus guiding the climatic number “Roofs” and a wandering imagination that gives them the courage to incorporate a handful of different musical feels into a relatively stripped down framework and never make it feel cluttered or overwrought. “Roofs”, in some ways, sums up all of their best across the board qualities and closes things on a clearly stated note. May XXVI is one of the most formidable debuts in recent memory and that’s doubly impressive considering how the album never announces itself in a chest-thumping sort of way. Instead, this is a subtle and beguiling experience, drawing you deeper in with each new song, until you find yourself fully immersed.


INSTAGRAM: https://www.instagram.com/fxrrvst/
Posted by Joshua Beach at 2:47 PM No comments: