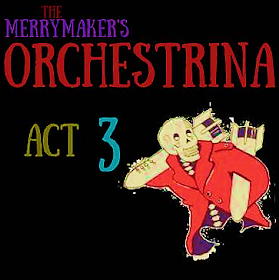 Albums with this sort of charged, highly vivid musical creativity don’t often emerge from the modern popular music scene. New York City based singer/songwriter Ryan Shivdasani’s boundless musical imagination brings a number of different styles into play over the course of the band’s full length release Act 3. The thirteen song collection, produced by Russ Flynn and released in April of 2018, manifests a stronger personality through its songs than many performers/writers manage over the course of three albums and his accompaniment on the album, drummer Danny Wolf and bassist Jack Redford on ten of the album’s tracks, are extraordinarily sympathetic to aiding Shivdasani realize his imaginative vision for Act 3. He’s since recruited likewise fitting musicians for the band’s live lineup, but there’s undeniable chemistry between Shivdasani and his core collaborators on the studio recording.

The fleet-footed pace of opener “Together” clocks in at just over a minute and comes off sounding like a diamond hard blast of alternative rock. Redford’s busy, yet precise, bass line has a descending quality that maintains its timing despite the brisk tempo. One of the album’s early marquee numbers is “Particle Craze”, complete with accompanying video, and the slightly dissonant melodicism, uneasy yet crackling with energy, recalls alternative rock textures with an unexpected infusion of electrified folk guitar jangle suggested in the playing. The lyrics are spartan and cut to the bone without even a single extraneous syllable compromising the writing and Shivdasani’s vocal delivery accentuates the slightly topsy, idiosyncratic mood of the song.

The same melancholy spirit informs the album’s third track “Watched You Out My Window” – it is, perhaps, the most literary lyric included on Act 3 and comes off as a bit of a cross between thoughtful alt pop with a retro feel and folk-influenced singer/songwriter material. “Cowboys and Indians” breezes along with deceptively aggressive energy and has the same sinewy line of musical attack we heard with the album opener. Michael Feinburg’s contributions on bass are, thankfully, seamlessly indistinguishable from Redford’s and he generates tremendous energy with drummer Danny Wolf. The ominous undertow of the track “Enemy” makes it one of the darker cuts included on Act 3 with the low rumble of its main guitar motif and how Shivdasani’s voice dovetails into the sound without a hiccup.

Shivdasani’s skill invoking angst and alienation comes clearly through with the song “In This World, Not Of It” and he invests even more passion than usual into a finely crafted lyric supported by another stellar ensemble performance. Shivdasani has the chops to distinguish himself individually with each of these tracks but refrains to do and prefers to focus his efforts on serving each song rather than hogging some transient moment of instrumental glory. The acoustic strains of “Fade Into the Night” help the song achieve its woozy, one in the morning feel without ever obscuring the inherent melodic qualities of this song. The final gem on Act 3, “Blood Country”, revisits that same art rock thrust defining the album’s best songs like “Together”, “Enemy”, and “Cowboys and Indians” with lightly poeticized social commentary laid over the top. Shivdasani’s creativity is in full bloom for this release Act 3 gives him an impressive foundation to build on from here.